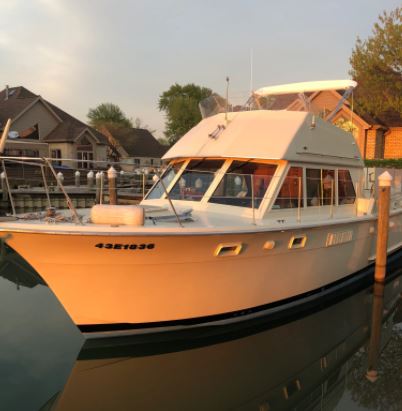 ” I have been told by those who know that it was one of the best boats Hatteras ever built.“

Interview with the Captains – Maurice Marwood

Why did you choose to buy this particular boat and what else did you consider?
I was up-sizing from a 30’ with one cabin, so wanted one bigger, as well as a sturdy, strong and durable boat suitable for rough conditions. The older Hatteras’s met these requirements. Besides, they are less expensive.

What boats have you previously owned?
I have owned 4 other boats over the last 25 years … CS33 sailboat, 32’ Grand Banks, 47’ Chris Craft Commander, 30’ Mainship Pilot Classic, and now this 38’ Hatteras Motor Yacht.

What are the features you like most about your boat?
I like the appearance of the boat as strong and heavy and well built, which it is, in contrast to the modern boats that are long and sleek-looking, but poorly built in comparison to the older Hatteras. I have been told by those who know that it was one of the best boats Hatteras ever built. In profile the design is very well balanced with a raised deck over the aft cabin, a centered main saloon, and uncluttered forward deck. The flybridge is positioned atop the main saloon and puts the helm in the center of the action. I like the optional lower helm station and find I use it more that the helm on the flybridge, since the visibility is so good. Side decks along each side of the saloon are adequate to allow movement fore and aft without risking life and limb.

The boat is constructed of solid fiberglass reinforced plastic (FRP). The hulls are laid up as a single piece with no coring; this adds considerable strength, as well as weight, of course. We only cruise at hull speed, about 809 nots so the weight is an advantage for stability.

What features/improvements have you added or do you plan to add?
I made several improvements and upgrades, mainly to bring the boat back closer to its original condition. There have only been three owners and the first owner gave it TLC for 39 years, so its condition was better than expected for boat of its age. I did a major cleanup, painted the bilge and the engines in their original color, bought a new boarding ladder, refinished the teak rails and swim ladder steps, installed new carpet in the salon, new mattresses, all new LED lighting, tuned the engines, new filters, new toilets and discharge hoses, and many other minor improvements.

Where have you traveled with your boat? What do you have planned?
Last summer we spent 8 weeks cruising Georgian Bay all along the small craft route from Killarney to Perry Sound. A wonderful area for cruising. Plan to continue exploring the Great lakes … lots more to see, although we have been up and down the Great Lakes over the past 7 years already. For 5 years I lived and worked in the Bahamas, and we lived on a 47’ Chris Craft Commander for 7 months as we cruised the Bahamas, east and west coast of Florida and up the ICW to Chesapeake Bay. I also teach for the Canadian Power Squadron, so that keeps me from getting too rusty.

Do you belong to a yacht club/marina or other boating organizations?
We belong to a small local boating Club – Sun Parlour Boat Club – and we used to belong to the Windsor yacht Club and The Great Lakes Cruising Club and attended a few of their rendezvous.

What is the biggest challenge you have in servicing your boat?
The work maintaining an older boat never ends and being an engineer and having worked on mechanical equipment all my life, I enjoy the challenge. I would say the biggest challenge is keeping a close watch on all the systems to quickly identify areas that need some attention. Of course, that’s true for all boats – old or new – but I want to have confidence in the ability of the vessel to perform well, so may be a bit obsessed with that.

Who first introduced you to boating?
I was living and working in Hong Kong and was asked by an associate to help him crew in a sailboat race on the South China Sea. I guess that’s where I first caught the bug. After returning to Canada, we bought our first boat, a CS33 sailboat that we enjoyed for 8 years in the Thousand Islands.

Do you have any advice for those looking to buy a boat like yours?
The first question to ask before buying any boat is: “What are you going to do with it?” For one who wants an older, less expensive boat for its better-quality construction, be sure to get a careful survey and inspect all areas of the boat yourself. Expect to have to do some improvements and take the time to learn the various systems and be able to do as much as you can yourself … it’s a work of love. I would particularly advise against buying a boat with coring in the hull below the waterline.

What’s the story behind the boat’s name?
It’s the name given by the original owner, almost 50 years ago – SIMBA. He asked his family what they should name it and one of his granddaughters had recently watched the Lion King movie, so it became SIMBA. I think it is a great name and have no intention of changing it.

Any recent boating-related purchase you’ve been enjoying (e.g. product/tool/equipment etc)?
The boat did not have any recent GPS or chart plotter device, so I bought a new GPS enabled iPad and installed the Navionix charting software. It worked great all summer for over 800 nautical miles through the rocky channels of Georgian Bay.

Do you have any other notable resources you use (apps, devices, etc)?
I use a few weather apps that are easily found through a Google search. There are many good weather apps available now so with some investigation it is quite easy to predict the weather within 24 hours and avoid bad weather. Of course, a sudden storm is always a concern. That’s one reason you need a strong, reliable boat.

Click the gallery below for more photos and information about SIMBA! 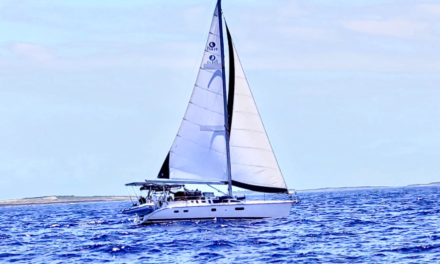 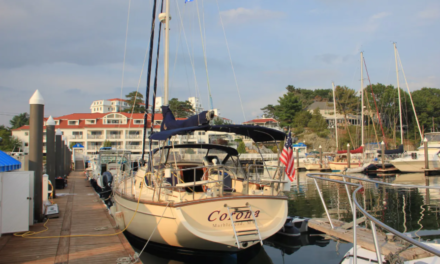 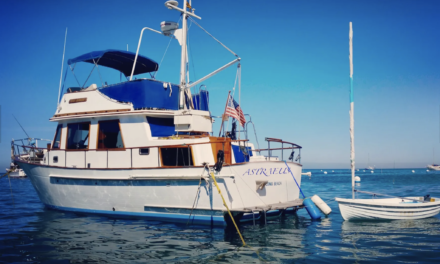 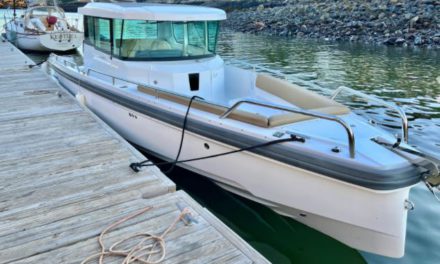