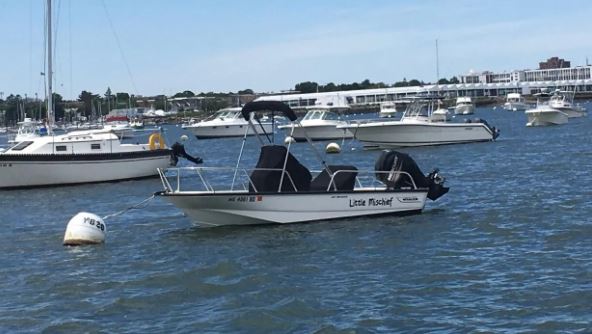 Interview with the Captain – Jay Watt

Why did you choose to buy a Boston Whaler?
I grew up using Boston Whalers as rescue and mark boats for sailboat racing on Lake Quannapowitt in Wakefield, MA. We had two; a 13’ Sport and a 20’ Montauk. When the 20’ came to us it had the original 1968 Evinrude 80hp on it. I helped restore and repower that one before we put it into service circa 1994. We later restored and repowered the 13’ as well.
They’re exceptionally solid and stable boats that require minimal effort for decades of useful life. When it came time to get our own little run around I naturally went with the builder I’d had so many years of experience with.

What other kinds of boats did you consider before buying this particular model (and how did they compare)?
I previously had a Sea Ray 215 Weekender and a 260 Sundancer. I wanted to move away from an outdrive and get something with an outboard. We also didn’t use the overnight capabilities that often, so I wanted to keep it simple to manage and maintain. Also, I wanted something the kids could be comfortable handling. I considered AquaSporrt, SeaRay’s bowriders, Scout, MasterCraft, Grady White and Carolina Skiff. I found the Whaler to be the best balance of high quality, low maintenance and price.

How did you come to find/locate her before purchasing (and what’s the boat’s history if you know it)?
I purchased the boat new from Russo/MarineMax in Danvers.

What features/improvements have you added or do you plan to add?
I’ve added a chartplotter and a bimini. I plan to add an arch with solar and a VHF antenna to the aft.

What are the features you like most about your boat?
The 15’ Montauk is their smallest center console. It is nearly as easy to dock and maneuver as the venerable 13’ sport, but with substantially more freeboard and the center console make it much better for visibility and balance (heel).

Who first introduced you to boating/sailing?
My parents actually met at the Quannapowitt Yacht Club as teenagers. They got away from sailing as they became adults, but stayed in the area. I grew up in Wakefield. When I was around 9 we went to visit the club. The club was just starting out a Junior sailing program so I was part of the first class. From there I spent most of my summers for the next 15 years at the QYC sailing, teaching, running races and caring for the boats.

How do you typically use your boat over the summer, and where do you go?
We mostly use Little Mischief for harbor cruises or to go explore the Salem Sound islands and up the local rivers. It also frequently gets used as a umpire or photo-boat for local regattas.

What is the biggest challenge you have in servicing your boat?
Scheduling local service during the season. It’s a Mercury engine and the number of local shops that will service Mercs is pretty limited. I take it down to Boats & Motors in Wakefield for its annual services.

Do you have any notable boating resources you use?
Nothing terribly specific to the Whaler. I got to www.bostonwhaler.com for model specifics, www.westmarine.com is always a good source for standard parts, www.marbleheadtrading.com and the Forepeak are a great go to for local needs, www.boatsnmotors.com for Mercury service and www.defender.com for more obscure parts, accessories and supplies.

Do you have any advice for those looking to buy a Boston Whaler like yours?
Figure out what you want to do with the boat and what your appetite is specifically:
● How many people do you expect to have on it regularly?
○ This determines the minimum length more than anything else.
● What’s your appetite for annual maintenance? In particular do you want wood or not?
○ The wood on Whalers is beautiful, but it is a commitment of either time or treasure to keep it looking that way. Same for other systems. There’s an elegance simplicity of a fiberglass boat with no wood and no complex systems (water, etc)
● Who’s driving it?
○ Whalers will take a beating, but if you expect a lot of “contact” from new drivers, a RIB may be a better choice.

What’s the story behind the boat’s name?
There have been many famous sailing yachts named Mischief including the 1881 America’s Cup Defender. I’ve always thought that if we decided to get a large yacht, we’d call it “Mischief”, so we started with “Little Mischief”. Also, it alludes to the goal of having a boat like this – to get in or cause just a little bit of mischief.

Click the gallery below for more photos and information about Little Mischief! 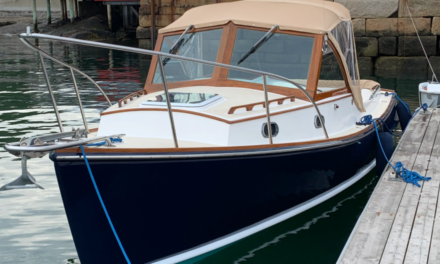 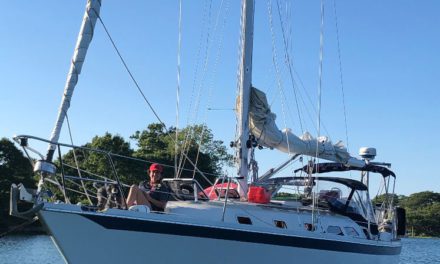 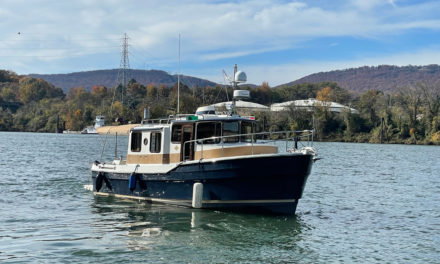 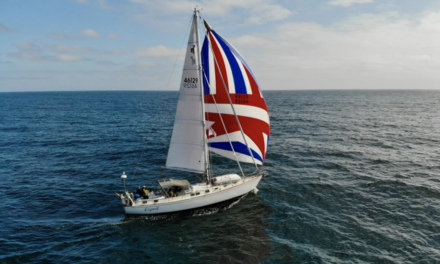